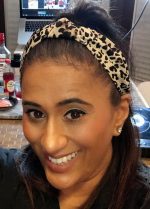 Ask Chef Neelma about her culinary background. She jokes that her culture has been focused on food for the past five thousand years.  Even before her professionally training, Neelma’s life was a culinary adventure.

Neelma’s life is a melting pot of countries, cuisines, and cultures.  A  fourth generation Indian, born and raised in East Africa, she came to the United States as a teenager, settling in New Jersey.  Living in countries rich in diversity and abundant in ingredients, her culinary palate is deeper than most. Learning from talented home and professional cooks, using tribal, ethnic, and modern tools and techniques informs her recipes and culinary classes.

Diversity of Culture and Flavor

Chef Neelma is passionate about food traditions. She wants to understand how the food industry, its economic, environmental and sociological aspects, impact culture. All this inspires Neelma to teach the cuisines of the world.