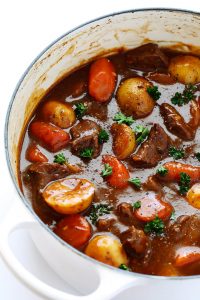 The word beef is from the Latin bōs in contrast to cow which is from Middle English cou.

This is one example of the common English dichotomy between the words for animals (from largely Germanic origins) and their meat (from Romanic origins) that we also see in word-pairs like pig/pork, deer/venison, sheep/mutton and chicken/poultry.

The reason for this split is that, after the Norman Conquest of Britain, the French-speaking nobles who ruled naturally used French words to refer to the meats they were served. And the peasants who did the actual work of raising the animals used various Anglo-Saxon words for those animals. Which is why we eat beef from cows.

The rarely used plural form of beef is beeves.

People have eaten the flesh of bovines from prehistoric times; some of the earliest known cave paintings show aurochs in hunting scenes. People domesticated cattle to provide ready access to beef, milk, and leather. Most cattle originated in the Old World, with the exception of bison hybrids, which originated in the Americas. Examples of Old World beef include the Wagyū from Japan, Ankole-Watusi from Egypt, and longhorn Zebu from the Indian subcontinent.

In the United States, the growth of the beef business was largely due to expansion in the Southwest. Upon the acquisition of grasslands through the Mexican–American War of 1848, and later the expulsion of the Plains Indians from this region and the Midwest, the American livestock industry began, starting primarily with the taming of wild longhorn cattle.

The Perfect Roast Beef with Yorkshire Puddings or Popovers

Grass-fed beef cooks faster than grain-fed beef. Grass-fed beef is ideal at rare to medium-rare temperatures. If you prefer meat well done, cook at a low temperature in a sauce to add moisture. A slow cooker is ideal.

Everything you always wanted to know about beef…