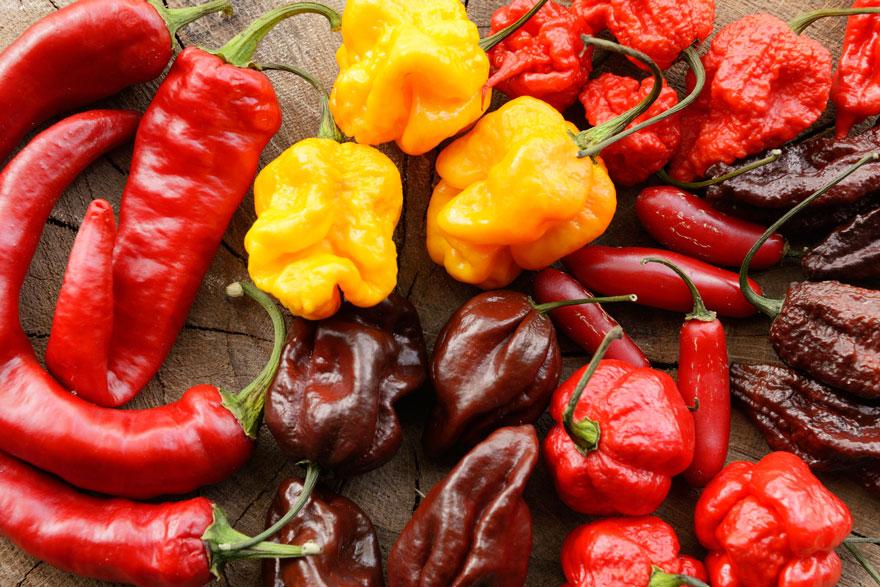 listen)), is the berry-fruit of plants from the genus Capsicum which are members of the nightshade family. Chili peppers are widely used in many cuisines as a spice to add pungency to dishes.

Chili peppers originated in Mexico. After the Columbian Exchange, many cultivars of chili pepper spread across the world, used for both food and traditional medicine. Cultivars grown in North America and Europe are believed to all derive from Capsicum annuum, and have white, yellow, red or purple to black fruits. In 2016, the world’s production of raw green chili peppers amounted to 34.5 million tons, with China producing half.

Capsicum fruits have been a part of human diets since about 7,500 BC, and are one of the oldest cultivated crops in the Americas. They were one of the first self-pollinating crops cultivated in Mexico, Central America, and parts of South America.

When Christopher Columbus and his crew reached the Caribbean, they were the first Europeans to encounter Capsicum. Remeber that Columbus was seeking a trade route to Indian to get Spain into the spice trade. When he first saw capsicum, he called them “peppers” because, like the black pepper corns known in Europe, they had a spicy, hot flavor. Portuguese traders introduced chillis to Asia and India towards the end of the 15th century.

The substances that give chili peppers their pungency (spicy heat) when ingested or applied topically are capsaicin and several related chemicals, collectively called capsaicinoids. The quantity of capsaicin varies by variety, and on growing conditions. Water-stressed peppers usually produce stronger pods. When a habanero plant is stressed, by absorbing low water for example, the concentration of capsaicin increases in some parts of the fruit.

Capsaicin is produced by the plant as a defense against mammalian predators and microbes, in particular a fusarium fungus carried by insects that attack certain species of chili peppers. Peppers increased the quantity of capsaicin in proportion to the damage caused by fungal predation on the plant’s seeds.

Many fresh chilies, such as poblano, have a tough outer skin that does not break down on cooking. Chilies are sometimes used whole or in large slices, by roasting, or other means of blistering or charring the skin, so as not to entirely cook the flesh beneath. When cooled, the skins will usually slip off easily.

The leaves of every species of Capsicum are edible. The leaves, which are mildly bitter and nowhere near as hot as the fruit, are cooked as greens in Filipino cuisine, where they are called dahon ng sili (literally “chili leaves”). They are used in the chicken soup tinola. In Korean cuisine, the leaves may be used in kimchi. In Japanese cuisine, the leaves are cooked as greens, and also cooked in tsukudani style for preservation.

Many Mexican dishes, including variations on chiles rellenos, use the entire chili. Dried whole chilies may be reconstituted before grinding to a paste. The chipotle is the smoked, dried, ripe jalapeño. In the northern Mexican states of Sinaloa and Sonora, chiltepin peppers (a wild pepper) are used in cheeses and soups to add spiciness to dishes.

In India, most households always keep a stock of fresh hot green chilies at hand, and use them to flavor most curries and dry dishes. It is typically lightly fried with oil in the initial stages of preparation of the dish. Chilies are present in many cuisines.

Some notable dishes other than the ones mentioned above include:

Fresh or dried chilies are often used to make hot sauce, a liquid condiment—usually bottled when commercially available—that adds spice to other dishes. Hot sauces are found in many cuisines including harissa from North Africa, chili oil from China, and sriracha from Thailand. Dried chilies are also used to infuse cooking oil.

While red chilies contain large amounts of vitamin C (table), other species contain significant amounts of provitamin A beta-carotene. In addition, peppers are a rich source of vitamin B6 .

Everything you always wanted to know about Hot peppers