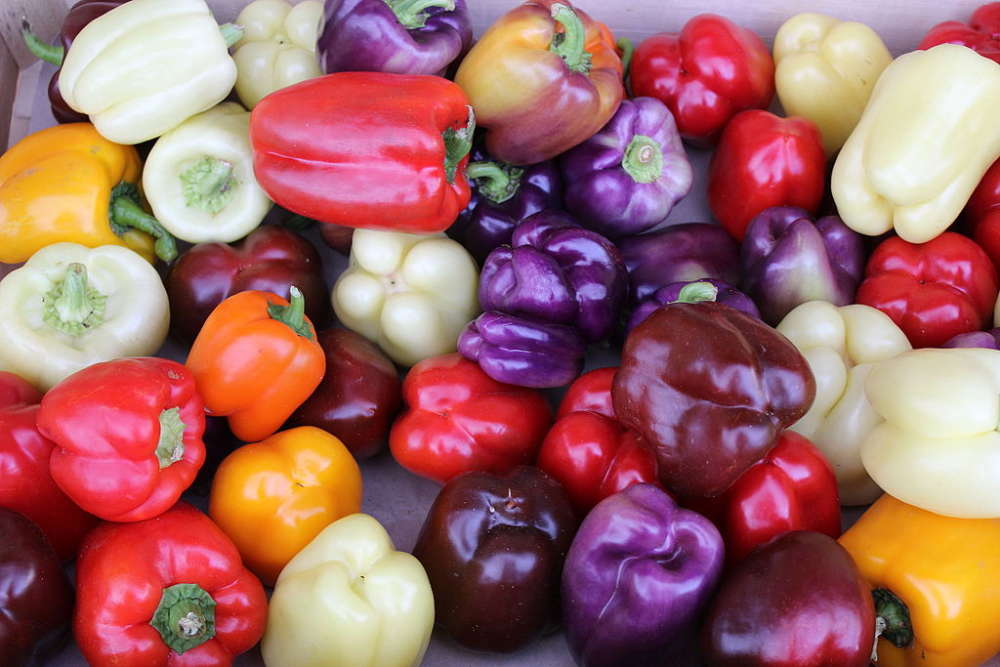 The bell pepper (also know as sweet pepper) is the fruit of plants in the species Capsicum annuum. Cultivars of the plant produce fruits in different colors, including red, yellow, orange, green, white, and purple. (A green pepper is usually an unripened pepper.) Bell peppers are sometimes grouped with less pungent chili varieties as “sweet peppers”. While they are fruits—botanically classified as berries—they are commonly used as a vegetable ingredient.

Peppers are native to Mexico, Central America, and northern South America. Pepper seeds were imported to Spain in 1493 and then spread through Europe and Asia. The mild bell pepper cultivar was developed in the 1920s, in Hungary.

The name pepper was given by Europeans when Christopher Columbus brought the plant back to Europe. At that time, black pepper (peppercorns), from the unrelated plant Piper nigrum originating from India, was a highly prized condiment. The name pepper was applied in Europe to all known spices with a hot and pungent taste and was therefore extended to genus Capsicum when it was introduced from the Americas. The most commonly used name of the plant family, chile, is of Mexican origin, from the Nahuatl word chilli.

The bell pepper is the only member of the genus Capsicum that does not produce capsaicin, a lipophilic chemical that can cause a strong burning sensation when it comes in contact with mucous membranes. They are thus scored in the lowest level of the Scoville scale. This absence of capsaicin is due to a recessive form of a gene that eliminates the compound and, consequently, the “hot” taste usually associated with the rest of the genus Capsicum.

Bell peppers are 94% water, 5% carbohydrates, and negligible fat and protein. They are rich sources of vitamin C, containing 97% of the Daily Value (DV) in a 100 gram reference amount. Their vitamin B6 content is moderate (17% DV), with no other micronutrients present in significant amounts. Red bell peppers have approximately twice the vitamin C and eight times the vitamin A content than green bell peppers.

Everything you always wanted to know about Sweet Peppers…