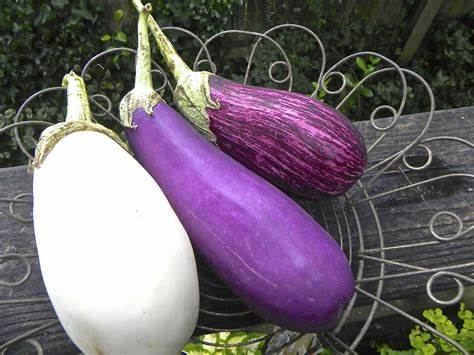 The Eggplant  (known as aubergine in most of mainland Western Europe, or brinjal in South Asia) is a plant in the nightshade family grown worldwide for its edible fruit.

Typically used as a vegetable in cooking, it is a technically a berry, botanically, and is related to the tomato, chili pepper, and potato.

The eggplant has been cultivated in southern and eastern Asia since prehistory, though its origin is unsure. The first known written record of eggplant is found in an ancient Chinese agricultural treatise completed in 544 C.E.

Because of the plant’s relationship with various other nightshades, the fruit was at one time believed to be extremely poisonous. In 13th-century Italian traditional folklore, the eggplant can cause insanity.

Raw eggplant can be a bit bitter, but it becomes tender when cooked and develops a rich, complex flavor. Rinsing, draining, and salting the sliced fruit before cooking helps remove the bitterness. The fruit absorbs cooking fats and sauces, enhancing the flavor of dishes.

Due to its texture and bulk, eggplant is sometimes used as a meat substitute in vegan and vegetarian dishes. Its numerous seeds are small, soft and edible, along with the rest of the fruit, and do not have to be removed. Its thin skin is also edible, and so it does not have to be peeled. However, the green part at the top, does have to be removed when preparing an eggplant for cooking.

Eggplant can be steamed, stir-fried, pan fried, deep fried, barbecued, roasted, stewed, curried, or pickled. Many eggplant dishes are sauces made by mashing the cooked fruit. It can also be stuffed.

Raw eggplant is 92% water, 6% carbohydrates, 1% protein, and has negligible fat. It provides low amounts of essential nutrients, with only manganese having a moderate percentage (11%) of the Daily Value.

Everything you always wanted to know about eggplant.